In the digital era, we are used to the algorithm, from the ones of the pandemic to those of the contagion. Michele Mezza, a long-time journalist, essayist, professor of New Marketing and New Media at the Federico II University of Naples, puts together the two words, algorithm and the pandemic, in the title of his latest book Il contagio dell’algoritmo. Le Idi di Marzo della pandemia, published by Donzelli Editore, Red and Black series.

Mezza is a communicator. So that, his essay does not deal with medicine or mathematics, but it informs the public of some dangers that, starting from the current pandemic, can be generated during production and collection of digital data.

As highlighted in the preface by Enrica Amaturo, Mezza observes that the pandemic has placed millions of people in the same condition, with the same language, the same perspectives, at the same time. From this point of view, only the digital network has similar characteristics. Millions of data and information circulate within a seemingly neutral and free space, a galaxy of interactions between subjects, which is both possible because of the absence of physical contact, and necessary because of the fear of contagion.

Contagion and network: Mezza establishes a parallel between them on the field of pervasiveness, logic and structure. Moreover, he defines their elements and overlaps them. The contagion moves by the spread of particles, as explained byphysics. In the same way, the relationships between social media’s contacts are propagated. Where the network was strongest, the greater the contagion. Therefore, Mezza effectively highlights the obvious congruences between the economic fabric, its dynamism, the power of the network and the expansion of the virus.

However, the author goes further. In addition to addressing the general question of the relation between the network and the spread of the virus, he warns us of the dangers inherent in this relation. The law, which guarantees the survival and the multiplication of the virus, combined with the restrictions that have been placed everywhere in the world on the physical movements of people, allows information to circulate on the internet and expand in numerical terms. 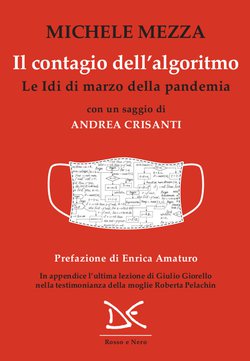 All people, confined to their home, use their own profile on social media. They can provide information about their situation in relation to the pandemic, for the sole purpose of communicating with the outside world. So that, a large amount of information about private subjects will be conveyed, managed, as well as owned.

In the essay by Andrea Crisanti, who works at the University of Padua, the inevitable reference to the “giants of the web” is also emphasized. After having explored further the incidence and the dynamics of the R value, the scientist points out that “For example, we could use the data held by Google to identify at the border every single person who returns to Italy after a stay in areas at risk and then submit them to diagnostic testing or invite them to remain in isolation.” This is a useful information for the health system and social organization and of great value for researchers could be used “To validate hypotheses and predict the evolution of the epidemic.”

The use of data

However, there is no doubt that, in the absence of common global regulation, this kind of information can be assembled and used by the owners, as they see fit. So, it is not difficult to move from collecting big data from our usual behaviors to create predictive algorithms that can influence and guide future choices. Therefore, everything is in the hands of a few people who, even in times of collapse of the company’s economic values, have seen the profits and capitalization of their companies increasing.

Very powerful economic players, who can influence choices, guide decisions, predict options affecting billions of people. Entities that own very intangibly valuable assets: the information we share into the network. These are, for these entities, the raw material, the inexhaustible resource of their intangible production process. Of course, there is no doubt that the economic impacts affect everyone.

As a professor of New Marketing and New Media, Mezza points out that all we have left is digital data to be shared. To this end, he identifies some suitable subjects to negotiate the transfer of sensitive data with the giants, that hold big data: universities, metropolitan cities, professional categories.

Putting in place an effective digital education, which allows people to seize the opportunities and know the pitfalls, seems essential. Only with knowledge, even with the related internal difficulties and conflicts, it will be possible to control the heterogeneous values inherent in the digital revolution. This approach should hopefully prevent the “Ides of March” of XXI century from being remembered for the transition to undemocratic power.

You can also read: