The thousand and one resources of the Swiss Daniele Finzi Pasca who is known an actor, director, and choreographer. He got back to his performative theater with Luna Park a carousel ride on stage at the Lac in Lugano until September 20th. The show lasts twenty minutes including acclimatization in the theatre’s backstage, where no more than twenty-five people at a time are welcomed, fifty “carousel rides” a day.

Walking between trunks intended to contain the stage costumes, such as armor clothes, feathers and shoes, then through an illuminated corridor, the spectator is led into the hall of the fairy tale where a time-travel takes place.

A 1950s America-style car loaded with suitcases on the top, steady on the scene; a young woman having a conversation with the man who is driving, mute. She talks softly about travelling, driving, about going to that is more beautiful than coming back, and about life.

The audience is immersed in this life-travel whose duration is random and that, like a carousel ride, can bring you down where you least expect it. She talks and moves, climbs on the outside of the car, while everything continues. He drives, the car is firm but goes on, as in dreams or fantasy. 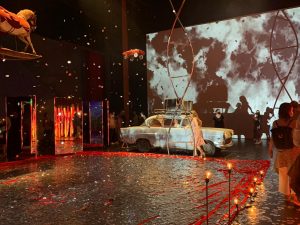 Another young woman, an acrobat, moves, dancing on a spiral staircase that dangles from above and then on the car. A horse, a toy car, a female dress, fly above the scene. Strobe lights are reflected on rotating mirrors and on a shower of silver floppy disks.

Each spectator enjoys a part of the show. And so, in its entirety, the actors move seamlessly in front of different groups of spectators who, from the margins of the scene, look, listen and live the performance of the artistic creation.

Daniele Finzi Pasca, a complete artist, multifaceted formation, was born from a family of artists. First, he became a gymnast, then he dedicated himself to the school of clowns and finally he found his voice through the mixing of the performing arts. Theatre, opera, dance, clowning, stage arts are the ground on which, with aesthetically elegant images and deeply steeped with feelings, Finzi Pasca moves naturally.

A journey into imagined space, in a time – the current one, of a pandemic – in which we should stay apart. Daniele Finzi Pasca intends to bring us closer to the theater, to its fairy-tale theatre, to each other. As if to say: life lasts the time of a ride, we do not have to waste time. Art should do its part.