It is forbidden to mention the Tiananmen massacre in China in 1989, and each year fewer yet know what really happened. But all media articles, fliers etc. on this subject have been collected by the democracy movement in Hong Kong.

In 1997, I erected an 8 meter tall monument in Hong Kong in memory of the massacre. This monument is so far still the only memorial about the Tiananmen Square massacre on Chinese land.

Placing this sculpture in Hong Kong costed me a permanent expulsion from China and two expulsions from Hong Kong. I think it’s important that artists, cultural groups, and others defend human rights, and that we use our freedom of speech to tell the story of the massacre.
Thirty-one years after the event, history seems to be tragically repeating itself. Now with Hong Kong as the epicenter for youth demanding their basic Human Rights and the Chinese Government forcefully fighting down the Youth. China latest move to pass landmark legislation to force national security laws in Hong Kong, effectively crushing the city’s autonomy, the situation is further excalating.

In February 2020, I have erected ‘A Pillar of Shame’ sculpture in front of the Danish parliament, as a protest against China, which is once again using extreme force against youth people demonstrating for their democracy rights, this time in Hong Kong.

The China’s National People’s Congress are now directly interfering with the justice system and the freedom of speech in Hong Kong, which is an unprecedented violation of the agreement between England and China for the handover of Hong Kong.

This is yet another move that shows that China is preparing to fundamentally change the status of Hong Kong so basic Human and Democracy rights will no longer be respected.
I hereby encourage everyone to protest against China’s assault on Hong Kong citizens.

In Denmark there will be a ceremony in front of the parliament to bring attention to both the 31st anniversary of the Tiananmen massacre and China’s current assault on Hong Kong.

Let us remember the Youth that lost their life at Tiananmen Square and let us support the youth in Hong Kong, so we will not see the same tragic outcome once again. 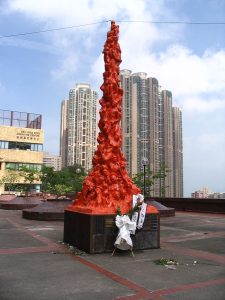 Give the Chinese their story back. It is forbidden to mention the story in China, but all the students’ newspaper articles, fliers etc. have been collected by the democracy movement in Hong Kong. These collections of Chinese and English documents have now been put on the Internet where they can be downloaded for free.

Many of the young dissidents were imprisoned in the wake of the crackdown. Some are still in jail but they are no longer young. China still practices massive censorship of information abour the massacre. And it is impossible for Chinese people to obtain